Image of Rumi on an old book in the Mevlâna museum; Konya, Turkey

Rumi’s poetry is often divided into various categories: the quatrains (rubayāt) and odes (ghazal) of the Divan, the six books of the Masnavi. The prose works are divided into The Discourses, The Letters,  and the Seven Sermons. 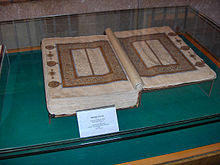